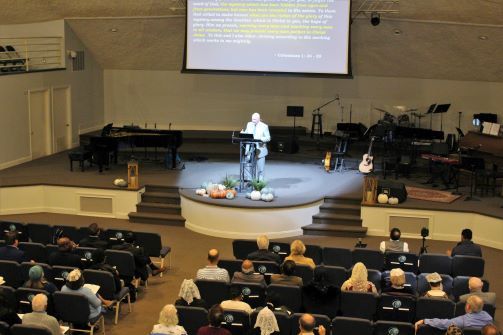 Since 1971, CMML has hosted a missions conference each fall. The event is always a special time, whether you’re a first-time attendee or you’ve attended every year since 1971 (it’s true: some haven’t missed a conference). But, in its 51st year, the Annual Fall Conference marked the culmination of CMML’s yearlong 100th-anniversary celebration—a commemoration of God’s faithfulness over a century while anticipating His plan for the future of Brethren missions.

On Saturday, November 13, more than 300 adults and children gathered at Grace Bible Church in Allenwood, New Jersey, to fellowship with other believers, learn about missions, and study God’s Word. The theme, Mission2022, challenged believers to engage in Christ’s mission today by rekindling our passion for evangelism, discipleship, and church planting. The keynote messages, delivered by Nate Bramsen (Missionary Prayer Handbook Day 25), Jim McCarthy (California), and Thomas Schetelich (CMML director), celebrated the past, considered the present, and suggested ideas for moving forward under Christ’s leadership as He builds His church globally.

Reflecting on the Gospel’s work
Once attendees arrived at the Annual Fall Conference’s new location, the event began with a showing of Compelled: A Century of Faith, Love, and Sacrifice, a 20-minute film that showcases missions stories from CMML’s century of service. Then, Thomas Schetelich presented the first keynote message, which reaffirmed the Brethren commitment to the Gospel of Jesus Christ and to the New Testament model practiced in local assemblies and their worldwide missions.

In the hour before lunch, attendees separated into groups to participate in Continent Tracks. Each track featured three videos, narrated by missionaries, that illustrated the spiritual needs and evangelical work in a particular global region. Then, via Zoom, the missionaries and participants engaged in live Q&A sessions.

At noon, the attendees reunited for a Chick-fil-A lunch, which has become a favorite conference feature over the years. Thanks to the new facility’s spacious gymnasium, all conferencegoers ate lunch together—something which returning attendees realized as a significant change. In past years, CMML divided lunchtime into two sessions due to a small dining area.

Going forward with renewed hearts
After lunch, the conference resumed with two more keynote messages. Weaving between the stage and the  audience in his active preaching style, Nate Bramsen challenged his listeners to “run to the battle,” even when that means confronting the unexpected. Using 1 Samuel 17 as an illustration, he answered the question, “How do we fight?” Then, Jim McCarthy spoke on the New Testament church’s principles and purpose while considering Ephesians 3:8–12.

Throughout the day, volunteers ran the children’s program so parents could focus on the conference’s sessions. Hannah Allen (New Jersey) managed the nursery while Annette MacArthur (New Jersey) organized activities for kindergartners, and Eric and Alma Smith (New York) worked with the grade-schoolers. The kids listened to Bible stories, made crafts, sang songs, and played games. According to one parent, his kids enjoyed the program so much that they begged to stay after the conference had ended.

Around 3:00 p.m., Craig Fritchey (CMML conference coordinator) sang “Compelled” before Bob Dadd (CMML president) concluded the conference with a few remarks and prayer. Some attendees returned home soon after, and others stayed behind to chat and explore an expo featuring ministries like Emmaus Bible College, Everyday  Publications Inc., and Gospel Folio Press. We praise the Lord for CMML’s 100 years and the Annual Fall Conference’s 51 years, and we anticipate what the Lord has planned for missions in 2022 and in the next century. As Bob Dadd said in closing, “May we go forward with fresh desires in our hearts, with the love of Christ compelling us to run to the battle.” ■

Originally published in Missions magazine, January 2021. For more content, sign up for a free subscription (US) to Missions at CMML.us/magazine/subscribe.