Missions Pathway is a new, free-of-charge booklet produced by CMML. Whether you are an elder from a commending assembly, a friend of someone considering missions, or an individual praying about missions work, this tool is designed to give you an overview of the practical steps for entering the mission field. 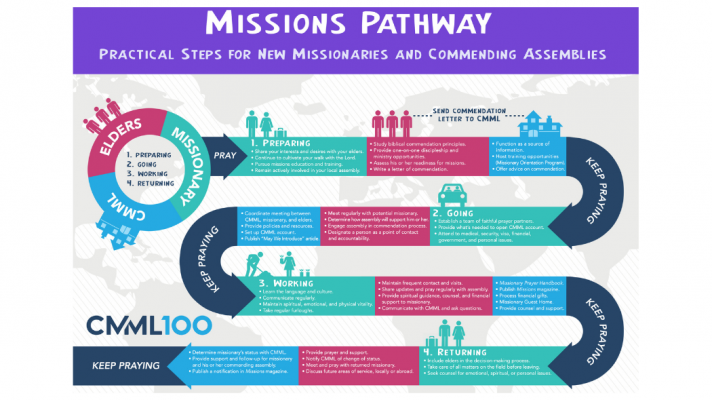 The Lord Jesus gave His followers the mission to evangelize the world, and the Holy Spirit in the Epistles gave the guidelines for this age-long effort. The contributors to this symposium, Global Strategy, believe that these principles should be known and can be practiced today. Almost all of these writers have served on the foreign mission field, some for 30 years or more. They appeal to Scripture rather than expediency, history, tradition, or customs today. 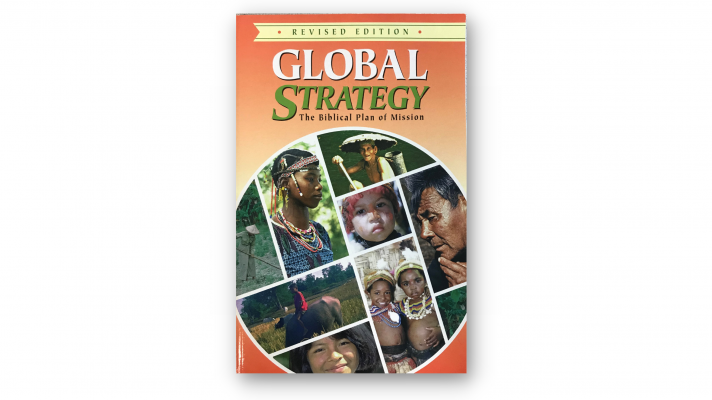 This collection of thrilling missionary stories of the Lord's care for those he tenderly calls "His own," compiled by Jabe Nicholson Jr., is a reminder to every believer of God's promise to provide for those who trust in HIm. The people whose stories are told in this book could be described by the words of Paul to the Corinthians: "As unknown and yet well Known." Many have left all that is familiar to take the gospel to places where Christ's name has not been heard. The full story is yet to be told when" the Day shall declare it." 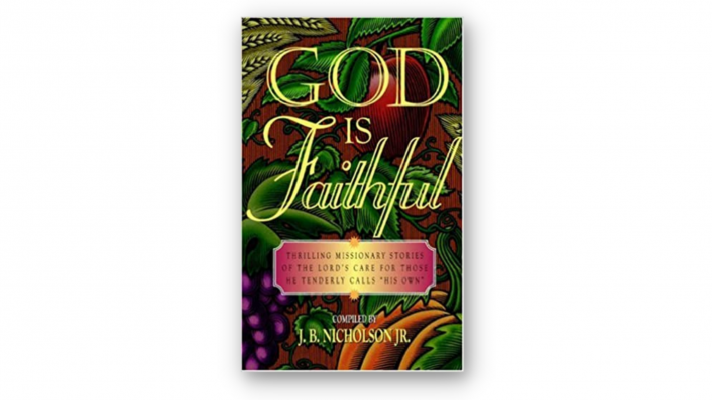 Generations have been inspired by Jim and Elisabeth Elliot’s lives and writings. Love So Amazing, written by the Elliots' nephew Gilbert Gleason, invites new generations into the further journeys of the Elliot family. Bert and Colleen introduced Jesus and His love to thousands in northern Peru’s jungles, mountains, and coastal cities, eventually planting over 150 churches. Bert and Colleen serve as the right kind of examples for “average” followers of Jesus, proving that, for most of us, substantial, supernatural impact is achieved through simple daily faithfulness, listening to Jesus, and loving people in His name. 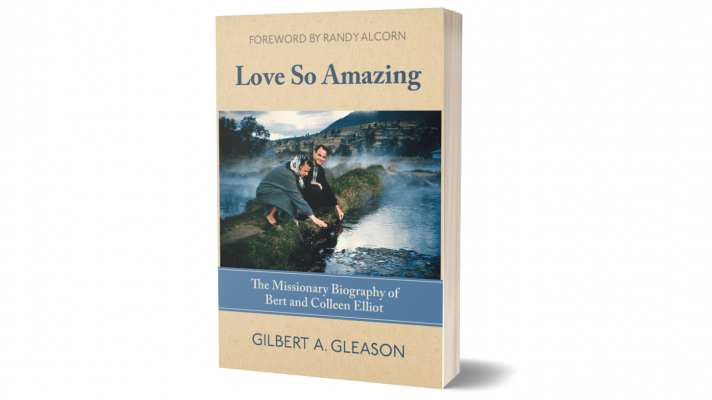 Jim and Elisabeth Elliot
Through Gates of Splendor

Through Gates of Splendor is the true story of five young missionaries who were savagely killed while trying to establish communication with the Auca Indians of Ecuador. The story is told through the eyes of Elisabeth Elliot, the wife of one of the young men who was killed. 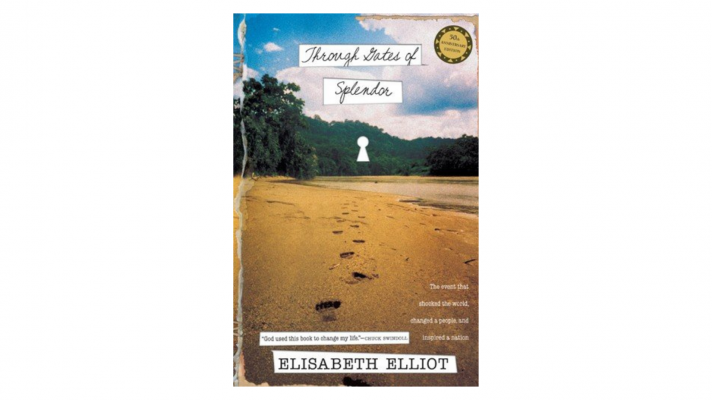 Jim Elliot
Shadow of the Almighty 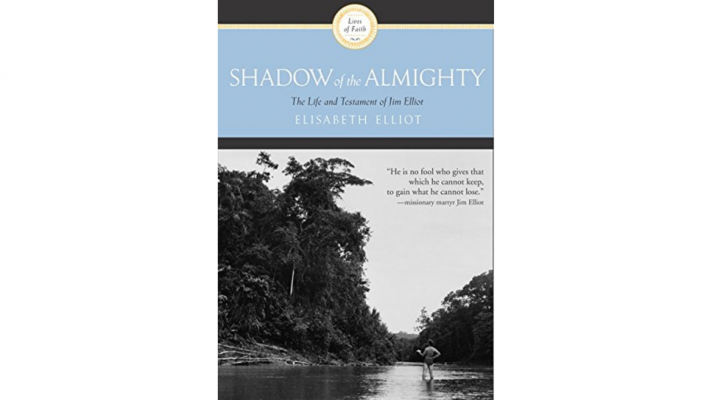 Written by veteran missionary, doctor, historian and missiologist Dr. Ian Burness, this biography of Frederick Stanley Arnot considers Frederick’s life in the nineteenth century and the impact of his work in Africa. 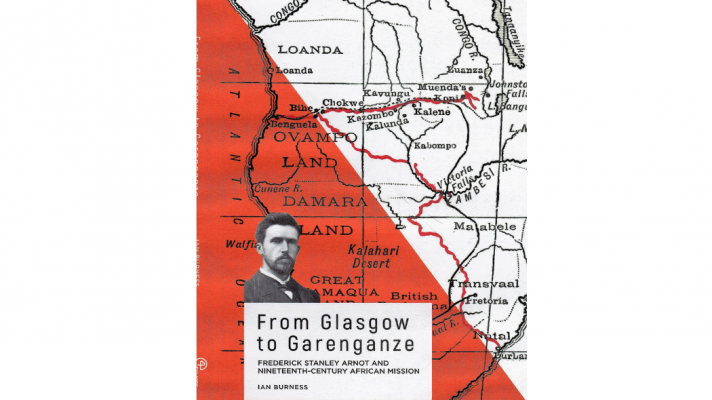 Pete Fleming
A Man of Faith

Pete Fleming, one of the five Ecuador Martyrs lived and died by faith. As Pete comprehended the power of God in his daily walk, he penned in his personal diary many of his soul’s struggles. Some of these comments are self-critical, many are triumphant and Christ-glorifying. Now Pete’s brother, Ken Fleming, has compiled the contents of these diaries, plus numerous personal letters written by his brother. Collectively they reveal in an exceptional way the spiritual maturation of this man of God. Unquestionably, this book is the chronicle of the growth of a Man of Faith. The author’s desire is that many young believers will be encouraged to follow the same pathway. 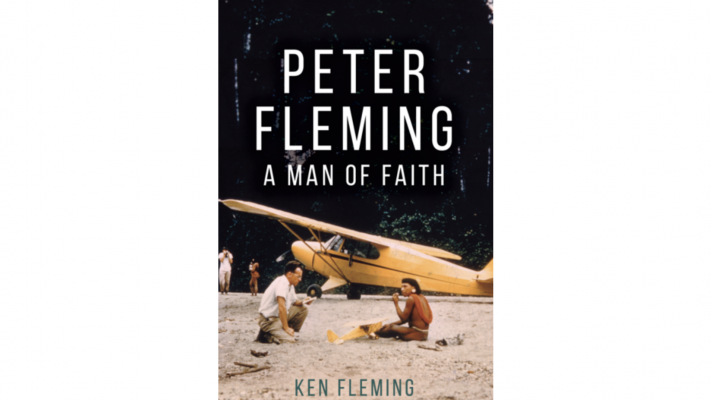 Conrad and Myrtle Baehr tell their own story of their work in Asia during the ’40s & ’50s. It’s a story of God’s challenge and His leading first to China, and then to U.S. Army Camps during the war years, back again to China, followed by ministry in Japan and Taiwan. Their story inspires all to sense God’s call to respond to the challenge, to enlist in the service of our great God and Savior, no matter where or what the conditions, and to campaign with faith and fortitude for Christ – for life. 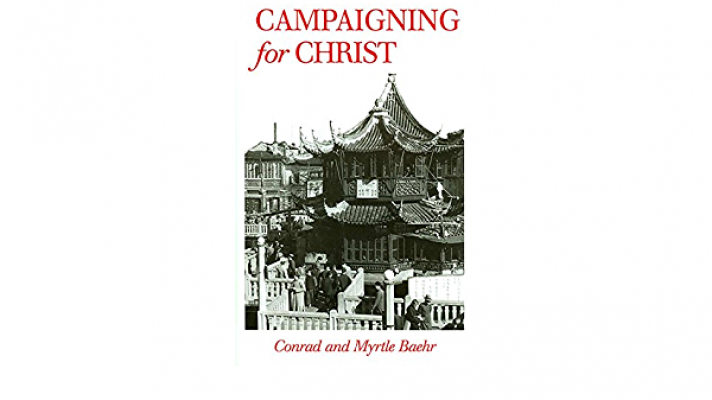 In this authorized biography, bestselling author Ellen Vaughn uses Elisabeth’s private, unpublished journals, and candid interviews with her family and friends, to paint the adventures and misadventures God used to shape one of the most influential women in modern church history. It’s the story of a hilarious, sensual, brilliant, witty, self-deprecating, sensitive, radical, and surprisingly relatable person utterly submitted to doing God’s will, no matter how high the cost. 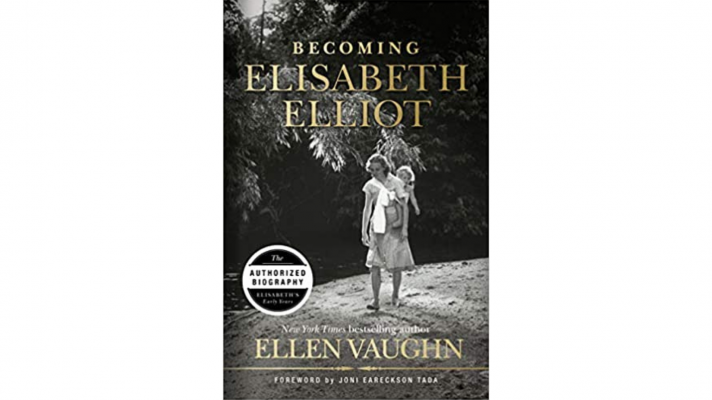 Written by daughter Peggy Deans Williams, Bwana Bill is the story of a man God used in remarkable ways and circumstances. Bill Deans looked to the Lord for the provisions and directions in his life for seventy years. The years that God gave Bill Deans in the Democratic Republic of Congo spanned from the most primitive people with almost no knowledge of the gospel, to working beside Congolese seminary and college graduates, knowledgeable in methods and equipment and worldwide information. There were cares, disappointments, and huge hurdles. In a real sense, though, they were not his problems, but God’s. His simple trust, his genuine commitment to Jesus Christ, and the work of  His Kingdom, especially in Congo, is inspirational. 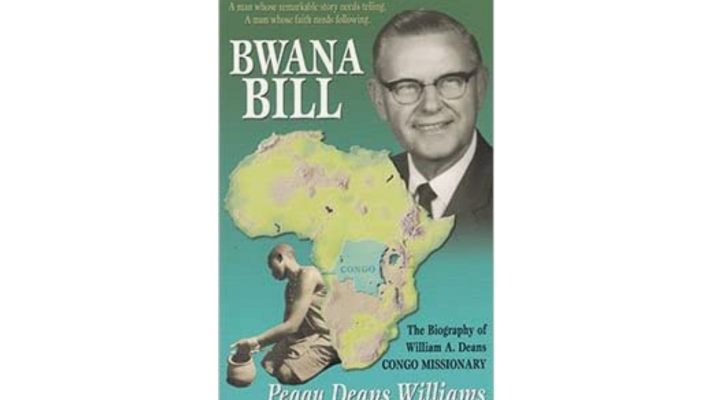 Written by Marjorie A. Clark based on the accounts of CMML missionary Sam Mattix, this book tells the true story of what happened to a missionary team in Laos after a Viet Cong raid on their village. Despite the assassination of their colleagues Beatrice Kosin and Evelyn Anderson, separation from their missionary team leaders Les & Emma Chopard, dodging bombs, becoming prisoners of war, and suffering a gauntlet of abuse at the hands of their captors, Lloyd Oppel and Sam Mattix found new courage, unexpected faith, and purpose to the sufferings they endured.

In May 1931, 70 missionaries serving in Angola, Belgian Congo and Northern Rhodesia, met at Muchacha in the Congo, to give thanks for 50 years of pioneering work, and survey the progress made, in what came to be known as ‘The Beloved Strip.’ Within these years, beginning with the going out of F. S. Arnot in 1881, a total of 283 men and women served there, coming from Britain, North America, Australia, New Zealand, and other parts of Europe. These were years of great change and uncertainty. Missionaries labored in an environment of deep-seated native beliefs and customs, the evil influence of white slave traders, and the dangers of wildlife. Author Bruce McLennan traces the developments of the first 50 years of this pioneer effort from the development of missionary stations, the establishment of indigenous and autonomous locah churches, the valuable contribution of native African Christians, the value and necessity of medical and schoolwork, and the indelible impact of women on the mission field. 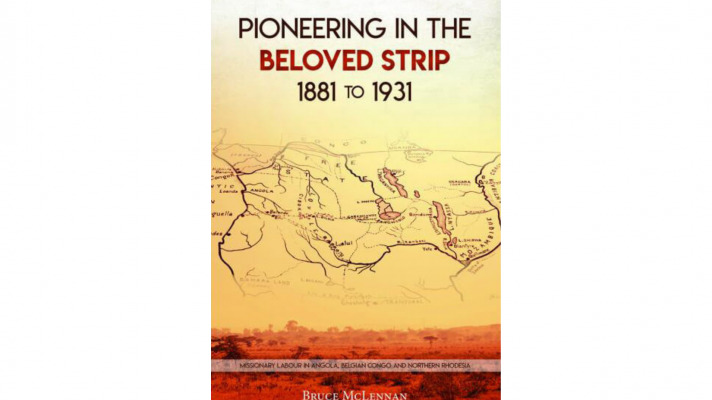 Africa, land of mystery, cruelty, fear, darkness, sounds, and smells. In the heart of this fascinating continent lies the little-known but much-in-the-news country of Angola. Read of Angola’s history, culture and customs, witchcraft, and folklore as well as T. Ernest Wilson’s experience with learning a new language, starting indigenous churches, sharing the gospel in the diamond mines, incredible journeys on foot, hardships and joys, frustrations and fruitfulness in the pioneer missions field. This autobiography is told with humor, warmth, and insight from forty years experience.

Cyril and Anna Brooks were pioneer missionaries in the Philippines. They served in the Philippines through World War II, a Japanese internment camp, multiple military coups, and deep personal trials. They founded multiple assemblies and many inter-denominational ministries such as Bible School of the Air and Faith Academy.  Cyril's autobiography "Grace Triumphant" is found here in its entirety free of charge.

Read It For Free 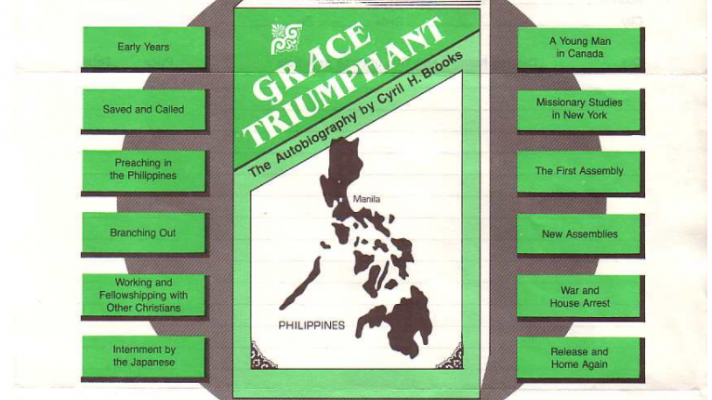 Missionary kids have the best adventures growing up in distant lands and under trying circumstances. The trick is to add some humor - of course, time helps the humor to develop. These are stories originally written for Jesse's own children and family about growing up in Bolivia. Each story encourages readers to adventure on in life and, if you are a missionary family, you and yours will surely relate! 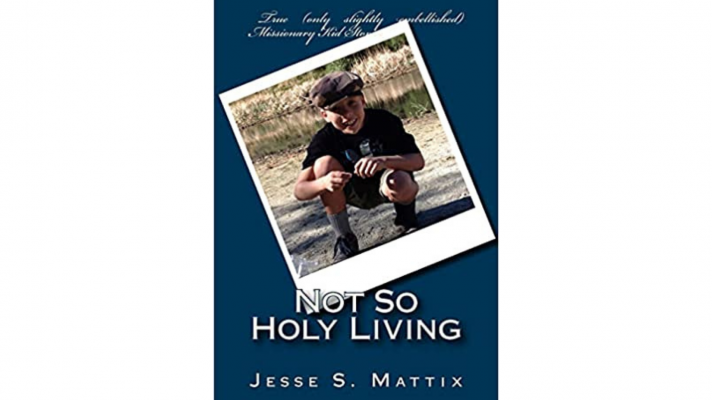 Madge Beckon
At His Feet - Lessons Learned from The Master

Where would you go when you infant daughter lay seriously ill in a land where you didn’t know a word of the language? Or when your town was surrounded by Communists ready to move in? Or when you sat by your dying husband, his body wracked with pain? Where would you go when your spirit longed to know God as one knows a bosom friend? Or when your heart was so full of gratitude it was nearly bursting? To His feet of course: the feet where Mary sat; the feet that once were nailed to a cross; where every knee shall bow. 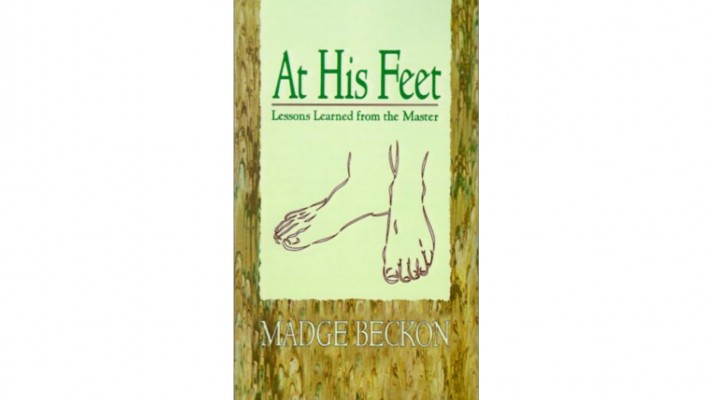 As young Christians, Wallace and Ruth determined in their hearts to give their lives in service for their Lord and Saviour. They had a sincere love for lost souls and wanted to share the glorious Gospel of the grace of God with everyone possible. Their service started in Buffalo, New York, later leaving for Central Africa in 1923. They served the Lord faithfully for 46 years. Over the years there were challenges, difficulties, and discouragements but their trust and confidence in their Master who provided, preserved, and protected them and their family was the foundation of their continued service. Many of the stories of God’s faithfulness were preserved by family members who received letters from the mission field telling of these extraordinary experiences. These were collected and arranged by David and Ruth Ann Logan with the assistance of other family members who still serve the Lord as missionaries. 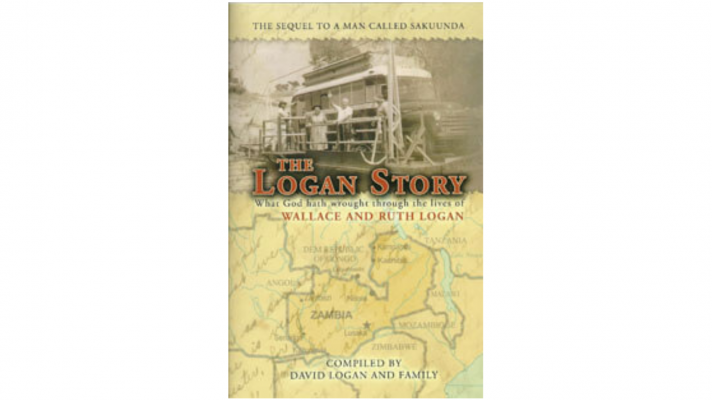 Pearl first arrived in the northeast corner of present-day DR Congo in 1953. She spent the next 49 years as a missionary nurse both on missions stations and in the Bush. She was one of the few missionaries who did not evacuate during the many wars but fled and suffered as one of the people. This updated edition shared the stories of her life of service as well as the joy she experienced as she said her final "goodbye" to her Tchabi "family" on her 87th birthday in 2007. 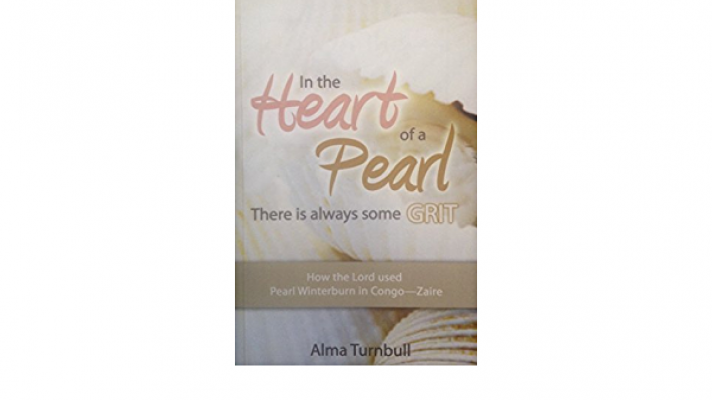 Evelyn Pelley
In My Father's Steps

As a child, Evelyn Pelley traveled with her missionary parents and siblings but in her late forties, Evelyn found herself working at an insurance company in the United States and wondering what happened to her missionary calling. At last, she felt led to teach music and Bible classes in an out-of-the-way town in Bolivia, where road conditions, health issues, and many uncomfortable and life-threatening circumstances assaulted her. Evelyn’s perseverance through trials and her dependence on the Lord and His provision shines out in this heartwarming story of her life. She and her co-worker Ana eventually taught countless children’s Bible classes and went on to train children’s Bible teachers in several different countries. It was with great joy that Evelyn realized her dream to follow in her father’s footsteps. 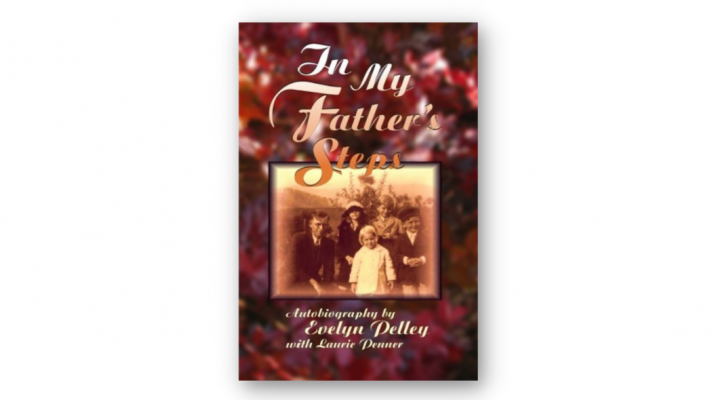 Anthony Norris Groves' name is not usually mentioned alongside William Carey and Hudson Taylor, but Groves had a pioneering influence that went beyond his personal reach. Exhaustively researched by Robert Bernard Dann, Father of Faith Missions is not merely about the life of one missionary but also a record of Groves' influence on missionary initiatives and the Brethren movement. Drawing upon Groves' own journals and letters, this book is both a journey into history and a reminder that God’s faithfulness is as true now as it was then. 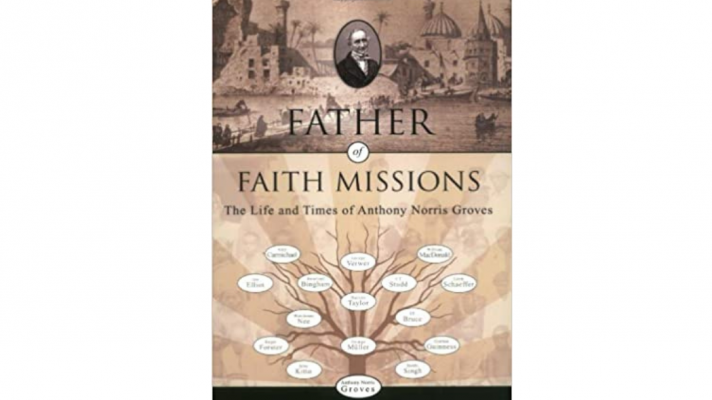