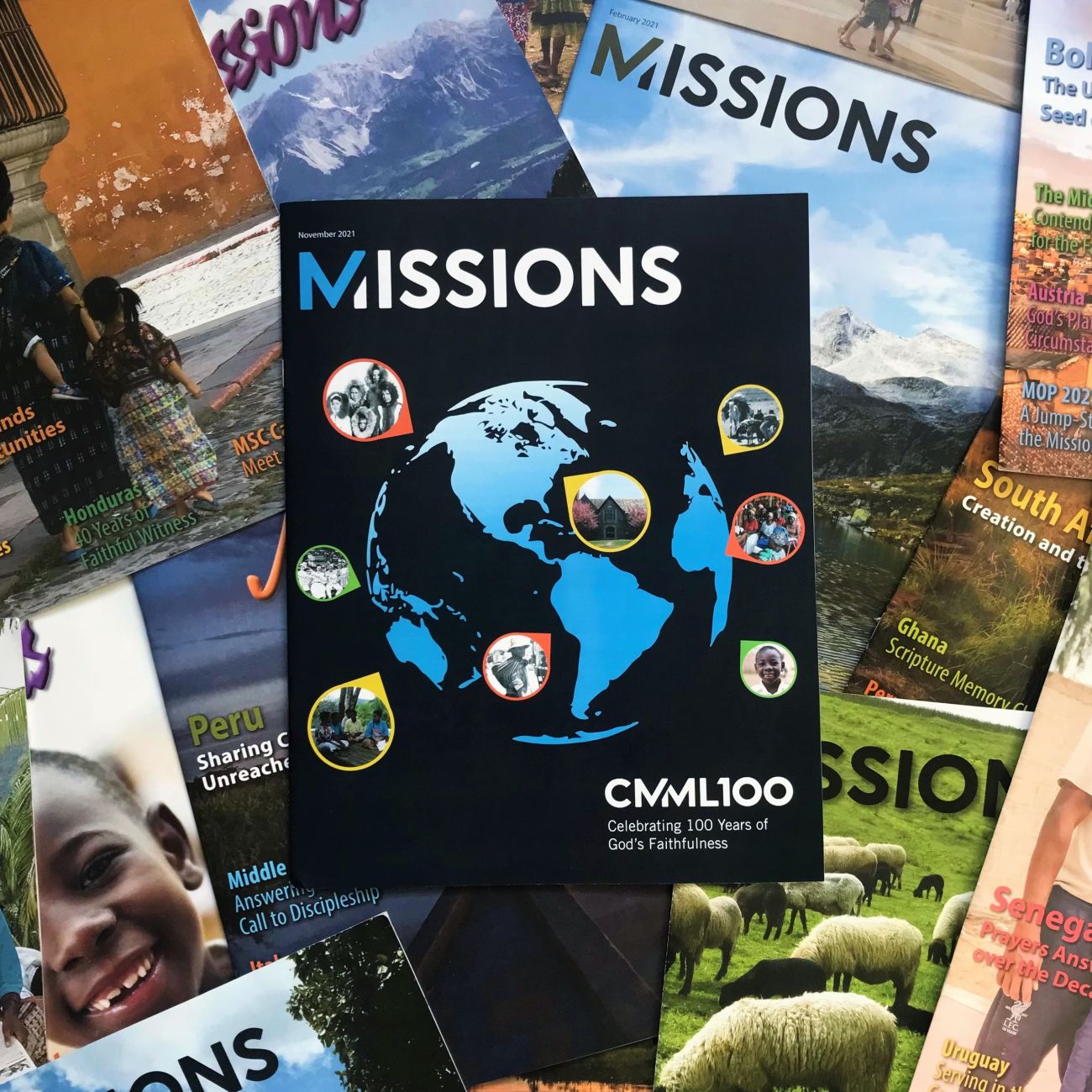 When you retrieve the latest issue of Missions magazine from your mailbox, you may not think of its potential for a life far beyond your own two hands. But, as its editor, I can assure you it has a rich one with a history, a job to do, a journey to make over thousands of miles, and a network of people to serve and interact with. Recently, one reader’s story reminded me of this life:

Following the death of her mother, a former CMML missionary, our reader wrote a “Home with the Lord” memorial article for Missions and, later, placed a copy of the published issue on her table. One day, her neighbor popped over to return a misdelivered package. An avid gardener herself, that neighbor noticed the magazine’s back cover, designed with freshly cut flowers surrounding a poem the missionary had written. Our reader then shared the Gospel and her mother’s testimony. Her neighbor appreciated it so much that, using her phone, she snapped photos of the memorial article and the poem so she could read them to her 16-year-old granddaughter.

Through this one interaction, the magazine affected our reader, her neighbor, the granddaughter, and myself. And I believe the missionary now home in heaven is rejoicing that the Lord used the words and pictures printed on a page.

Since July 1972, stories like these have illustrated Missions’ life, and this month, we are thrilled to celebrate its 50th anniversary, reflecting on its unique history and purpose.

The organizations that made Missions
To understand Missions’ history, we must begin long before 1972—instead, traveling back to the founding of four Brethren missionary service organizations and their two publications. Without them, Missions wouldn’t exist.

In 1904, while a new century was dawning, a believer in New York City began publishing a two-page pamphlet of missionaries’ letters to distribute news from the foreign field. At a time when foreign news traveled slowly, the pamphlet took off among the Brethren assemblies. It became known as Voices from the Vineyard and, at its height, had a circulation of 14,000. As awareness of global missions increased, believers formed the organization Voices from the Vineyard to transmit donations to missionaries worldwide.

In May 1921, while the Voices publication and organization thrived, another group created Christian Missions in Many Lands, Ltd., also in New York City. It purposed to represent missionaries at foreign consulates or in matters involving the US State Department. Without its own publication, this organization relied on Voices to distribute missions news.

Then, in 1938, the Fields sprang up in New York City and also began transmitting funds to workers and publishing a monthly subscription magazine. Besides missionaries’ letters, The Fields featured articles and reports.

For the next 32 years, the two publications and three organizations, along with a fourth known as the Julia Hasse Memorial Missionary Home, functioned as separate entities but worked in unison. By 1970, their leaders realized that they could be more effective stewards if they united. So, in 1971, they merged under the name Christian Missions in Many Lands, Inc. (CMML).

Voices from the Vineyard ceased publication with its January 1971 issue, and The Fields continued until the leadership could finalize the organizational merger and form a new magazine. In July 1972, the first issue of Missions circulated, reaching thousands of believers in the US and Canada.

The purpose motivating Missions
Today, Missions serves more than 6,300 readers and represents missionaries sent out with CMML and MSC Canada. In its 50 years, Missions has published 547 issues, 12,732 pages, and approximately 2,000 feature articles about missionaries and their ministries.

Recently, Missions garnered recognition from the Evangelical Press Association, the world’s largest professional organization for the evangelical periodical publishing industry: In 2020 and 2021, it earned an Award of Merit in the category of missions magazines. Then, this year, Missions received the Award of Excellence—the top award in its category.

But the goal of Missions has never been to publish as many pages as possible or win awards. Rather, Missions disseminates news from the mission field for three reasons: to keep believers informed about the worldwide outreach of assembly missions, to encourage effective prayer for the needs of the Lord’s servants, and to engage readers in missions through short-term trips or full-time service.

Each feature article or department serves these goals. When you open an issue of Missions, the “Thinking It Through” devotional greets you with a biblical challenge or spiritual encouragement; then, about three feature articles offer a firsthand look at ministries in countries as distant as Cambodia and as nearby as the US or Canada. Next, the departments like “May We Introduce” and “MK Corner” acquaint you with the people behind those ministries, and “Connections” briefs you on current news and activities on the field. Finally, “Keeping in Touch” announces changes to the Missionary Prayer Handbook, including furloughs, marriages, births, and new workers.

The people behind Missions
As seen in the opening story, Missions connects people across the globe—all for God’s glory and the advancement of the Gospel. We praise the Lord for each person involved in that spiritual impact: the subscriber who eagerly awaits each new issue and prays for the people and needs reported within, the conference attendee who picks up a copy and is moved to support a ministry, the prospective missionary who reads about a family on the field and visits them to explore God’s call, the eighth-grader who reads Missions to learn more about global cultures and gains an interest in the world’s spiritual needs, the neighbor who notices it on your coffee table and asks about cross-cultural missions.

We’re grateful for each missionary who contributes an article or update letter; for each supporter who prays for the magazine and contributes financially; for the long line of Missions editors who have paved the way forward; and for each person involved in its monthly production, from planning to design to proofreading.

However you interact with Missions, we thank you. But, most of all, we thank the Lord for His 50 years of working in and through Missions, and we pray for many more to come.

Originally published in Missions magazine, July 2022. For more content, sign up for a free subscription (US) to Missions at CMML.us/magazine/subscribe.