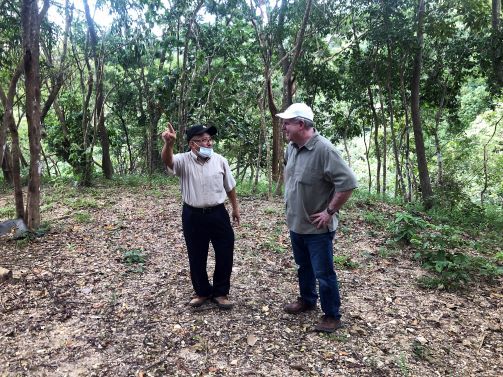 My heart is always warmed when missionaries in distant fields and nationals from other countries relate reports of gospel campaigns resulting in a thrilling harvest of souls. Yet, in a strange way, I’m just as encouraged to hear about years of faithful labor in proclaiming Jesus to the lost when the result is a trickle of conversions rather than a torrent.

These seemingly less spectacular accounts encourage me for two reasons: First, I believe that such is the common experience. Second, and more importantly, I admire the determination of saints who push forward in sharing Christ despite, at times, less than hoped-for results. My admiration deepens when those faithful believers are few in number and of limited resources.

To this remarkable category belong the 300 or so assembly Christians found on the small, relatively unknown Caribbean island of Roatán, where I have had the joy of visiting occasionally for ministry trips, most recently in February 2021.

Roatán is one of three rocky but beautiful islands dotting the clear waters off the northern coast of Honduras. Although Spain originally claimed Roatán, by the 1700s, it came under British control, even serving as a quasi-penal colony for the Garifuna, an ethnic Caribbean people group. In 1859, Britain ceded its control to Honduras after the latter gained independence.

For years, Roatán’s pristine reefs and unspoiled beaches went largely unnoticed, and the island built a small fishing industry as its primary source of income. This same industry attracted a young Honduran man, Dagoberto, to the island in the early 1980s. With him, the story of assembly outreach begins.

In his new life on Roatán, Dagoberto spent his days working on the shrimp boats. In the evenings, he would tread French Harbor’s muddy streets, sharing the good news of salvation in Christ with anyone who would listen. By the end of his first year on the island, seven precious souls had come to know the Lord and started meeting in one woman’s home.

In 1985, the Christians, numbering 35, began a gospel outreach in a small community called Sandy Bay, more than 12 miles from French Harbor. Such an outreach was no easy task, given that none of the believers owned a car. They would take the afternoon bus to Sandy Bay, but by the time the evening meetings ended, the only way to return home was by foot. Those faithful Christians would sing hymns of praise as they plodded the dark, deserted road, finally arriving at their homes well after midnight, exhausted but thankful.

Many of the Christians in French Harbor lived on a swampy piece of land crowded with wooden shacks. One day in 1991, a witch doctor who also lived there was burning sorcery candles when one fell on a mattress. He didn’t notice until a fire was already raging. The conflagration eventually engulfed his house and 30 others, including that of Antonio, a dedicated believer.

The Christians united to build Antonio and his family a new house, and Antonio asked them to build it in Los Fuertes, a barrio (neighborhood) they had been trying to reach with the Gospel. In subsequent years, Antonio’s faithful witness to his new neighbors led several to the Lord.

Again, the believers on Roatán pooled their money, this time to buy property in Los Fuertes on which to build a chapel. All they could afford was a small lot clinging to a steep hillside; it was difficult to access, and a cluster of buildings completely obscured it from the road. Even hidden from view, the assembly became a shining lighthouse to the lost.

Cayos Cochinos and beyond

Soon, the Christians on Roatán began to cast their eyes beyond their own shores. In 2002, the (now four) assemblies purchased a small, open boat equipped with a well-used 45 horsepower motor. They would lade the boat with plantains and bags of beans and cornmeal and then make the precarious journey to the cays known as Cayos Cochinos. There, they would share their food with the impoverished residents and preach the Gospel.

Over the next few years, several of the islanders came to Christ, and it seemed that an assembly would soon form. At this time, however, foreign investors contracted a 40-year lease on the cays to build a tourist resort. The residents, including the new believers, were displaced to the mainland.

Undaunted, the Roatán Christians began praying for their neighboring islands of Guanaja and Utila. In 2017, a young man volunteered to move to Utila to preach the Gospel. Four years later, after countless hours of witnessing and evangelizing, 11 believers worship there and have built a small chapel.

Looking to more distant fields, the Roatán believers commended a believer to establish an assembly in the remote department of Lempira, on mainland Honduras. Even farther afield, they sent a believer and his family to the Catholic city of León, Nicaragua, where he and another Honduran missionary have helped form a small church.

Space fails me for writing of the children’s gospel campground that the four assemblies are developing, their weekly gospel preaching from one end of the island to the other, the new outreaches in Crawfish Rock and El Paraíso, or of their frequent gospel campaigns.

More than 40 years ago, Dagoberto first set foot on Roatán’s shores. Sadly, in January 2021, he passed into the Lord’s presence, a victim of COVID-19. Yet his example of perseverance and sacrificial service lives on.

Forty years of faithful, dogged service have resulted in perhaps 300 conversions on Roatán. Some evangelistic campaigns see more people come to Christ in a single evening. Nevertheless, my heart is overwhelmed with admiration and thanksgiving for the believers on Roatán and their unwavering desire to serve the Lord Jesus and reach others with His message of love.

American standards would consider the Roatán believers impoverished. However, they have an indescribable, everlasting reward awaiting them in eternity. “These . . . having seen [the promises] afar off were assured of them, embraced them, and confessed that they were strangers and pilgrims on the earth. . . . Therefore, God is not ashamed to be called their God, for He has prepared a city for them.” (Hebrews 11:13, 16) ■

Jim and Sharon Haesemeyer serve in Other Overseas Service to Honduras. They are commended from South Plains Bible Chapel in Lubbock, Texas

Originally published in Missions magazine, June 2021. For more content, sign up for a free subscription (US) to Missions at CMML.us/magazine/subscribe.