God Uses a Library: Sharing the Light of the World in Ujiji, Tanzania 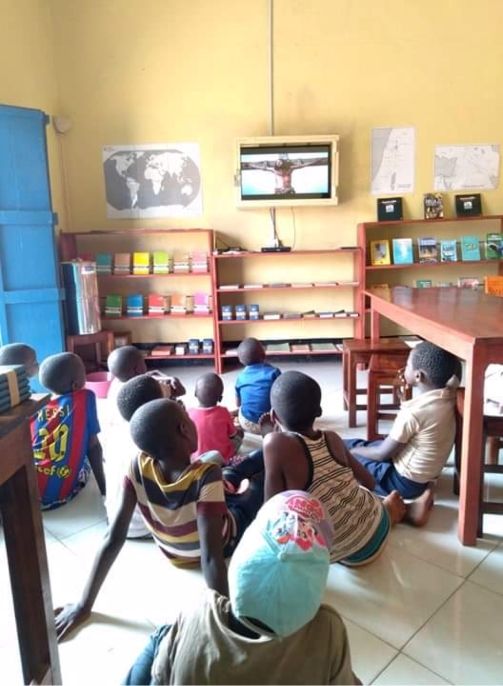 Each day, Islamic calls to prayer echo across Ujiji, a small town on Lake Tanganyika in Tanzania. Approximately 100,000 people live here, most of whom are Muslims. But, starting in December 2018, God has made His presence known here in His own unique way: through the Light of the World Library (or Maktaba ya Nuru ya Ulimwengu, as it is called in Swahili).

Since February 2018, my wife, kids, and I have served in Ujiji, which has a tremendous need for the Gospel. When we arrived, we planned to serve through evangelism, Bible teaching, and discipleship. By October of that year, we had sensed the Lord’s leading in a particular direction. I hadn’t set out with a Christian library in mind, but we wanted to make good Christian books available for people—including local pastors, Christians, and even Muslims—to read at no cost. So we rented a storefront in the town’s main intersection and began plans to turn it into an outpost for the Gospel. After some fresh paint and new tiles and a few touch-ups, we opened the Light of the World Library in December 2018.

More than a library

With the help of Kanisa la Biblia Publishers, the Emmaus bookstore and publishing company located east of us in Dodoma, we ordered more than 100 books in Swahili from authors like William MacDonald, John Piper, and Don Fleming. In our function as a maktaba (“library”), people can check out books at no cost; we even have a section specifically for Muslims who want to understand the Gospel. We also distribute free Gideon copies of the New Testament in Arabic and Swahili along with various gospel tracts.

Besides being a library, the maktaba functions as a meeting place, office, and hub for activity. Although some people are afraid to enter because they fear persecution from their Muslim peers and family members, others stop in regularly to chat, read, or watch some of the King of Glory movie that is often playing on the TV. This gospel film, which Paul Bramsen (MPH Day 27) created, explains the Bible with Muslim viewers in mind.

We have watched as some adults who don’t want to be seen in the maktaba send their children in to get them a Bible or a tract. Either way, the Gospel is getting out into an area of great spiritual need. Rarely does anyone leave empty-handed.

An open door into the schools

Half of Tanzania’s population is under age 20, so we also feel burdened to reach Ujiji’s youth with the Gospel. Tanzanian government schools schedule one hour per week for a religion class, where Christian or Muslim leaders can come and teach the children. Sadly, few Christian leaders take advantage of this amazing open door. Yet the government granted permission to Gerald, my Tanzanian partner. So, each week for the past two years, he and I have taught in two elementary schools in Ujiji. And, recently, we added a third school. All of them lie within walking distance of the maktaba. What a joy to systematically and evangelistically teach the Bible to 60 to 80 students at each school weekly.

Because of the Bible-teaching ministry in the schools, many of the children come by the maktaba after school to watch King of Glory. Gerald has explained to me that we can show this gospel film with no problems, but if we were to teach the children from the Bible ourselves while they are at the library, their parents would not allow them to return. We are thankful for how the Lord is sowing His seed in Ujiji through this film.

Besides books, tracts, and copies of the Injil (New Testament), the maktaba offers more than 40 Emmaus correspondence courses in Swahili. These provide excellent Bible teaching at a small cost. Once a student finishes a section of eight courses, the Emmaus office in Dodoma sends a certificate, and I present a book from the maktaba as a gift.

One of the first people to start the Emmaus courses was a taxi driver, Riziki, whom I met in town one day. I gave him a tract and a Gideon Bible and invited him to the maktaba for a visit. He was a young Christian hungry for the Word. We not only became good friends, but he also became our first student to finish all of the Emmaus courses. Gerald is right behind him, nearing the finish line. These Emmaus courses are a great tool in discipleship, and we encourage any who show interest in the things of the Lord to start the first course.

A space for building friendships

Each day is unique as people stop by Maktaba ya Nuru ya Ulimwengu for different reasons. Juma, an 80-year-old Muslim man, visits daily—once in the morning and again in the afternoon. We have become part of his routine, and we hope that what he hears and reads will lead him to the Savior. Sadiki, a teacher in a Shia mosque in town, likes to stop by and debate the doctrinal differences between Islam and Christianity.

There is also Von, who runs a juice shop across the street, and Azama, who runs a beauty salon next door. Chuki operates a bus stand across the street and stops by most days along with Michael, who manages a nearby pharmacy. Unfortunately, Sada—who started having dreams of Jesus after reading the Gospel of Matthew—moved out of the area. All of these are our friends, whom we see and talk with daily. We thank the Lord for how He is using the maktaba to build relationships with so many.

A catalyst for new opportunities

Recently, a couple of young Christian men stopped by and invited me to play soccer with them one evening and give a gospel message afterward. These two men, Pagi and Saidi, play soccer with a group of youth most evenings. Originally, they had agreed with a Muslim friend to alternate messages from the Quran one evening with messages from the Bible the next, but after one week, the friend suggested they teach just the Bible after each game instead.

I have visited this group several times and shared my testimony and the Gospel. Recently, three of them left Islam and trusted Christ as their Savior. They have since been forced to leave their homes, forsaken by their families, and are living by the lake and fishing for their food. Nevertheless, they rejoice amid these trials their new faith has brought them.

For more than a year, we have been praying about starting a youth camp in Ujiji. Gerald is gifted in teaching and working with children and youth, and in the past, he was involved in camp work in other parts of the country. There is not a youth camp on the entire west side of the country that we are aware of. We believe that such a camp would meet a need in the lives of many young people in Ujiji and Kigoma, and we look forward to the Lord’s leading in this area in the future.

The Lord has used the Light of the World Library in many ways over the past three years. The Gospel shines through the distribution of Gideon Bibles and tracts, showings of The King of Glory, participation in Emmaus courses, lending of gospel books as well as through teaching the Bible in schools and on the soccer field and daily forging relationships with acquaintances and neighbors. We thank the Lord for this storefront, and we pray He will continue to protect it.

Undoubtedly, God is at work in people’s hearts in Ujiji. Please pray that these precious souls will turn to the Savior in the days, weeks, and years to come and that He will continue to use this little outpost for His glory and purposes. ■

Originally published in Missions magazine, February 2022. For more content, sign up for a free subscription (US) to Missions at CMML.us/magazine/subscribe.