The Gospel On Cambodia’s Silver Screen: Debuting the Khmer Translation of King of Glory 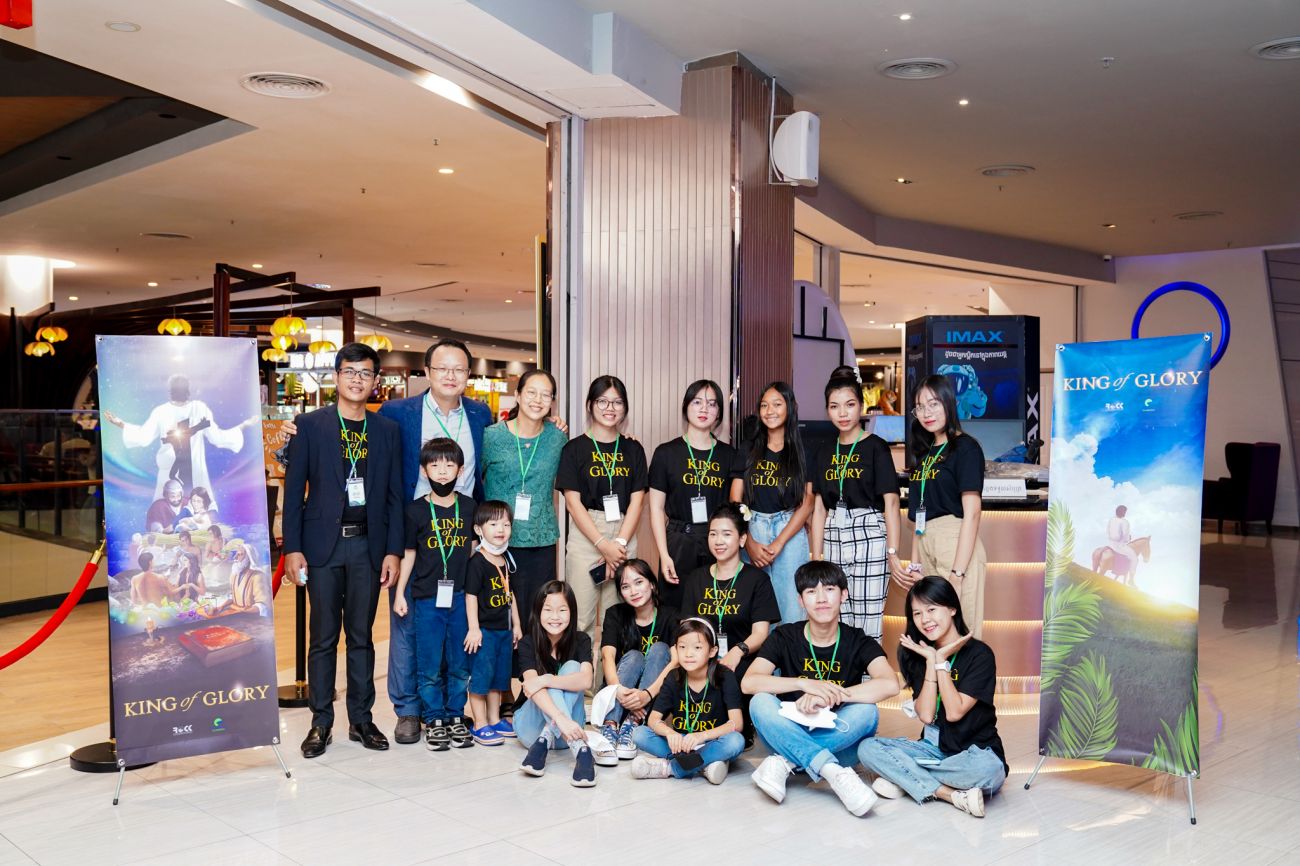 How do you share the Gospel with Cambodian Buddhists, whose unique worldview mixes with animism? Quoting John 3:16 or quickly walking through a tract is not enough. For a Buddhist, saying a sinner’s prayer may not seem much different from performing another religious ritual to get what you want—wealth, health, and prosperity. Such a “quick and easy” evangelistic approach results in no lasting fruit.

Presenting the Gospel in a way that brings souls to true repentance and faith in God and His completed work of salvation is more critical than ever: although a Buddhist nation by law, Cambodia is the most religiously open country in Southeast Asia and is bombarded with the prosperity gospel and other false gospel teaching.

Several years ago, we helped proofread the Korean translation of the King of Glory picture book, written by Paul Bramsen (Missionary Prayer Handbook Day 27). We thought the whole curriculum (picture book, movie, study guide, and coloring book) was exactly what we needed in Cambodia. The content points out foundational truths about God, man, sin, and salvation; it uses five Old Testament sacrifice stories to explain why the Messiah had to die; and it presents a panoramic, cohesive view of God’s story in chronological order. So we desired to translate it into Khmer, the heart language of the people we serve.

A process with challenges and blessings

The Khmer translation of King of Glory kicked off in 2015, but we encountered many delays due to our circumstances: the needs of our children, ongoing ministry demands, and a major shift in our ministry focus. Initially, we planned to publish the book first. But, when the COVID-19 pandemic began affecting Cambodia, we noticed that more Cambodians gained access to the internet—where the King of Glory movie would eventually be available for viewing and downloading. And we already knew that most Cambodians prefer to watch something, not read. So we changed our direction to finish the movie first.

We spent many hours translating, proofreading, and editing the content. When we finally started recording the movie’s narration track, we faced an intense spiritual battle. In the greatest challenge, Insun had a heart attack right before the final check of the recording. Despite everything, God used the images, Bible verses, and stories from King of Glory to minister to our hearts and give us incredible peace as He reminded us of His power, faithfulness, and goodness.

A memorable premiere
When the movie was ready for release, the Lord led us to consider premiering it at a commercial movie theater. Such an event would introduce the wider Christian community to King of Glory and encourage God’s people to use it to strengthen young believers and clearly present the Gospel to all ages across Cambodia and beyond. As we explored the possibility, God opened doors—one after another. We booked a 266-seat auditorium from Major Cineplex, a leading commercial movie theater located inside the largest mall in Phnom Penh, the capital city. The date was set: July 9, 2022. The month marked 30 years since God had led Paul and Carol Bramsen to start their media ministry, which would later produce King of Glory. By God’s grace, the Khmer King of Glory was the 50th language to be released.

We sent out invitations, and many were excited and interested in this unprecedented event. More than 200 guests came, and among them were church leaders, Sunday school teachers, and young people from more than 10 churches. A group of believers from the Jarai tribe traveled farthest—a 10-hour bus journey! Missionaries and full-time workers associated with a dozen Christian organizations, mission hospitals, and campus outreach groups also attended. Some guests invited their unsaved family and friends to join them, making it an evangelistic event too. The production team also joined, with much excitement to see the fruit of their labor.

Insun, the director of Emmaus Cambodia, started this memorable event with a word of welcome. Then, through a video message, the audience “met” Paul Bramsen and heard the fascinating story behind King of Glory. For the next 3 hours and 42 minutes, the audience took an intense, exciting journey through the Bible. During intermission, complimentary pop-corn and soda pleasantly surprised many guests

Encouraging feedback
When the movie ended, there was a moment of silence. The audience was deeply moved, but then, they started to clap—to the glory of God! Later, some of the believers shared encouraging feedback about the Khmer King of Glory: “It was wonderful to confirm what I believe,” said an elder’s wife, “and I was reminded of whom I serve, from the beginning to the end. It encouraged me to serve God with all that I have.” And a campus ministry leader said, “God will greatly use it in Cambodia.”

The movie affected nonbelievers too: “It was a good opportunity,” said a Christian worker, “for my brother-in-law and his niece to hear about Christ, and I was so excited that they both watched the movie until the end.” The unbelieving father of an-other Christian worker said, “Now, I have a better understand-ing of what my son and the other elder preach at church.”

The day after the premiere, the Khmer King of Glory movie was finally released on YouTube. Since then, we have been en-couraged to see the number of views increase steadily, currently climbing above 600.

Praise and prayer for God’s work
We praise God that an event like this was possible in the capital of a Buddhist country, where Christians are considered a minority. We praise God for the freedom. We also praise Him for the outstanding teamwork among our Emmaus coworkers and volunteers, the friendliness of the theater staff, and the help and encouragement from Paul Bramsen and his team.

As the Lord leads, we plan to translate the King of Glory picture book, study guide, and coloring book into Khmer, enabling movie viewers to go deeper. Please pray that God will use this excellent gospel tool to move the 16 million Khmer-speaking people to bow their knees before the King of Glory.

Originally published in Missions magazine, November 2022. For more content, sign up for a free subscription (US) to Missions at CMML.us/magazine/subscribe.