Picking Up the Baton in Guatemala: A Missionary Uses Technology to Expand His Family's Ministry 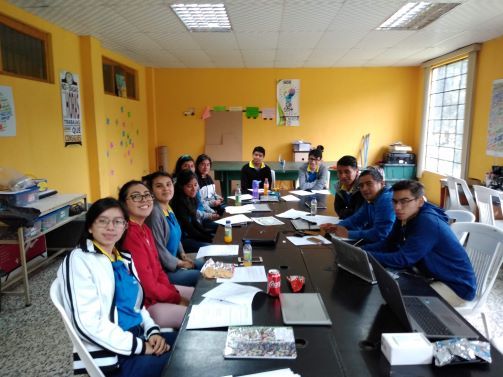 In 1963, my family completed a journey across Mexico and made a pit stop in Guatemala. My parents, Jim and Carla Cocking (Missionary Prayer Handbook Day 16), were new missionaries with CMML traveling through with plans of serving in Colombia. In the early ’60s, much of Central America’s infrastructure was largely undeveloped, and Guatemala was no exception. In fact, when we arrived, the main highway was being paved for the first time.

We quickly realized the trailer we were towing was not up to the challenge of the rough mountain roads. We had to order a new axle from the United States, extending our family’s “pit stop” in Guatemala by six weeks. Little did we know that those six weeks would sprout roots of a mission that still bears fruit nearly six decades later.

During our stay in Guatemala, my parents saw many opportunities to leverage their medical training to show God’s love to the people around us. The Guatemalan people were warm and welcoming, encouraging my parents to stay rather than continue on to Colombia. My dad had graduated from Baylor College of Medicine but was not qualified to practice medicine in Guatemala. So he started attending Spanish classes and enrolled as a medical student at the Universidad de San Carlos. About a year later, he received a Guatemalan medical license—a tool he would use to serve the Guatemalan people in God’s name for more than 50 years.

Translating the Bible into K`ichè

Guatemala’s oﬃcial language is Spanish, but people in rural areas speak some 21 regional Mayan languages. After Spanish, K`ichè is the most spoken language. In the last 60 years, Guatemala’s population has roughly tripled to about 17 million, with about 10 percent speaking K`ichè (approximately 1.7 million).

Growing up among the K`ichè people gave me an understanding of and love for them, as well as a deep appreciation for missions work. Often, I accompanied my parents to their clinics, attended meetings with K`ichè-speaking believers, and helped record Christian radio programs.

In 1977, an older K`ichè believer, don Patricio Xec, asked my parents to assist with a Bible translation project. (At the time, the New Testament was available in K`ichè, but don Patricio was determined to see the rest of the Bible translated into his language). The United Bible Society, which was developing ways to use computers for translation, sponsored the project.

A year after they started the translation project, I left Guatemala to pursue a degree in electrical engineering at LeTourneau University in Texas. Part of my education included computer programming courses, so soon, my parents and don Patricio asked me to apply my newfound knowledge to the translation project. While the skills weren’t exactly aligned, I could solve some problems, including adding special marks to letters to designate sounds unique to Mayan languages and creating a K`ichè dictionary that the computer could use to spell-check the translation. My parents continued working on the project with don Patricio until the K`ichè Bible was published in 1995.

Returning to my Guatemalan roots

For many years after college, I worked in the US as an electrical engineer on high-tech research and development projects. During those years, I often thought about my childhood in Guatemala and found myself contemplating how the Lord could use me there. Even after my parents returned to the US in 2016, I felt an increased burden to spend time in Guatemala, eventually considering a full-time ministry there.

In 2019, Southside Bible Chapel in Colorado Springs, Colorado, commended me, and I became a full-time CMML missionary in Guatemala. I was some 30 years older than my parents were when God called them to serve Him as missionaries, but still, I did not have a clear idea of what ministry the Lord was leading me to. So I started working with a group of K`ichè-speaking believers and continued broadcasting Christian radio programs on a local station, which my parents had done for many years. I began to realize that, while many things had changed since I was a child, the challenges remained the same: people need a knowledge of God’s Word and character so they can develop a relationship with Him.

God’s work is not new work; many have toiled for years for the sake of the Gospel, creating high-quality resources in numerous languages in the process. The sad truth is people don’t use them anymore. Years ago, people enthusiastically received gospel tracts, and the novelty of showing the Jesus film in a village attracted large crowds. Today, people are less likely to carefully consider a tract and don’t really care about videos.

Bizarrely, we live in a paradox: the internet has made Bible-teaching resources more accessible than ever, yet the sophisticated media industry makes sure people spend their time and data on the content that generates the most ad revenue, not on what can truly transform them.

How can we reach people when there is so much competition for their attention? Here in Guatemala, we’re working hard to make sure people know about the valuable resources available to them. For example, the Jesus film is available on the internet in many languages, including K`ichè, but few K`ichè speakers are aware of it. Evidently, it never occurred to them to do a Google search for a video about Jesus in K`ichè. This reality led me to build a website with links to valuable Bible-related resources. (1) I also use it to host hymns and other materials in K`ichè that my parents developed. Now, I tell people about resources in their own language on the internet and distribute business cards advertising the website and the radio programs.

I am also involved with a group of young people who tutor grade-school children at rural public schools with limited access to technology. Through this group, I met university students who were seeking projects for their technology program. Their professor invited me to discuss possible projects with the class.

One of the university students, Wilson, began developing software for a “media box” that would operate on a low-cost, commercially available computer board. It resulted in a handheld device that stores the desired media in a memory chip and makes it available over Wi-Fi. Users can access the media, presented as a website, from a smartphone over Wi-Fi without needing to pay for an internet data plan.

The tutoring group’s concept was to use the devices to send educational materials home with students who lacked internet access. I was also interested in using them to distribute Christian media. This was the beginning of the media box project.

After Guatemala confirmed its first case of COVID-19, the government suspended in-person religious and educational activities and put other restrictions in place. I was largely confined to my apartment and focused on the media box project. With Wilson’s help, the media boxes replaced the in-person tutoring. We also used them to deliver Christian messages to believers in their homes since they could no longer meet at the chapel on Sundays.

Next, we implemented a learning management system in the media boxes, used to provide the students with instructions, and updated the media boxes to serve multiple websites. We could also add Christian content to the educational content. People were pleased with the updates and told us that they served the needs of their entire family: children continued learning even though schools were closed, and everyone at home could learn more about God’s Word.

Between the tutoring program and the local believers at the chapel, we currently maintain about 100 media boxes. It is an opportunity and a challenge. Updating the content, which we must do in person, enables us to interact with people, but it is time-consuming. We would like to make even more content available and update frequently, but to do so, we need to improve the update process. In recent months, I have been communicating with people with technical backgrounds in the US. We meet regularly via Zoom and are investigating options, such as serving multiple households with a single media box and using the cell network.

Praying for the future

Please pray that God will give me wisdom during what seems to be a time of transition ahead. Pray that, soon, the believers at the K`ichè-speaking chapel in Chajabal will be able to resume meeting in person and that others from the area will be drawn to the fellowship. Pray that God will use this ministry—in all of its facets—to draw entire families closer to Him while it helps the students academically. ■

(1) Our website is AbriendoLaBiblia.org, which translates as “opening the Bible.”

Originally published in Missions magazine, June 2021. For more content, sign up for a free subscription (US) to Missions at CMML.us/magazine/subscribe.