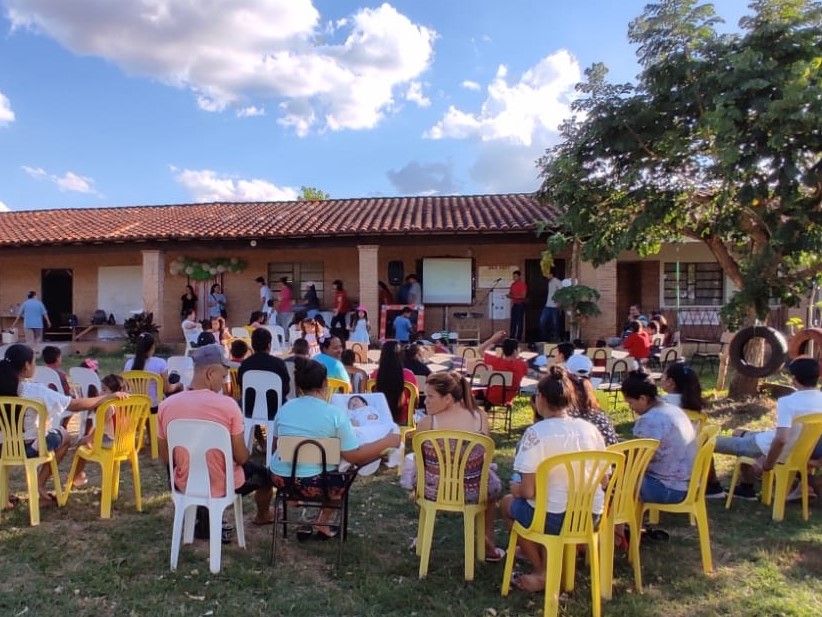 Many readers have heard about or even participated in creating shoebox gifts, or shoeboxes that people fill with toys, personal hygiene items, and school supplies and send to children in impoverished areas or locations where disasters happened. These boxes show God’s love in a tangible manner and have led to children and families accepting the Lord and growing in their faith. On and off during our time serving the Lord in San Juan Bautista, Paraguay, we have been on the receiving end of these gift-filled shoeboxes, and we have witnessed what a blessing they can be—in bringing joy to children and creating gospel opportunities.

In January 2022, we had the opportunity to once again use the shoeboxes to demonstrate God’s love. A few months prior, working through the Paraguayan branch of Operation Christmas Child, a ministry of Samaritan’s Purse, we requested 170 gift-filled shoeboxes and attended a one-day training program. Then, we started praying about and planning how we could best be involved in the shoebox distribution.

Sharing ideas, making plans
We decided to host three events. One would be for the children who attend the Sunday school at our church. Another would be for the kids who participate in a children’s activity on Saturdays at the home of church members Alberto and Teresa (“Tere”). During the height of the COVID-19 pandemic, children’s meetings were prohibited at the church building, but after several of the couple’s nieces, nephews, and neighbors went to their house asking for the activity, Alberto and Tere began teaching Bible stories and playing games with them in their yard.

For the third event, one of the young women in the church, Ruth (“Ruthy”), proposed a bigger outreach in a neighborhood near her home—an area with low-income families, social problems, and at-risk youth. Ruthy worked with other volunteers
from the local church and organized a two-week vacation Bible school (VBS), from January 15 to 30, with a daily schedule of singing, memory verses, Bible lessons, and a snack. The plan was to use the nearby elementary school, which would be closed for summer vacation. We approached the school’s principal with our request, and thanks to Ruthy’s and her family’s good testimony in the area, we received permission.

About 20 teenagers and adults from the church volunteered to help with aspects of the VBS, including transporting chairs, providing snacks, teaching lessons, and preparing the music. Ruthy’s sister, Evelyn, who studies graphic design, made the invitations. We planned to hold the evangelistic shoebox distribution on the first day of the VBS, a Saturday, so a few days before, teams passed out the invitations along with tracts and calendars. Fifty-one children, some accompanied by parents and one by a grandparent, attended the program. At the end, they received their gift-filled shoeboxes, which brought many smiles and much joy. Then, we invited them to return on the following Monday and every afternoon for two weeks.

Help abounds—from the Lord and believers
December to February are the summer months in the Southern Hemisphere, and usually, the weather is very warm. This year, Paraguay experienced an unprecedented heat wave with temperatures hotter than 104 degrees Fahrenheit and very high humidity. We wondered if parents would allow their children to come. Originally, we had planned to ask for the use of classrooms with ceiling fans, but the school was under construction, so we could use one room, a porch, and the outside area. The Lord gave us a location in the shade and a breeze most afternoons, so it worked out better than our original plan.

Up to 60 children, along with at least six parents, attended every afternoon for the two weeks. The children were enthusiastic, and as soon as they saw our vehicles drive up, they started to come. Some of the people who had volunteered handed out water, helped the kids wash their hands, or set up chairs. Some of the shyer people did these important, behind-the-scenes jobs and felt needed and useful even though they were not up front teaching.

During the setup and cleanup times, we talked with several children and adults. We noticed that most of the adults paid attention to the lessons rather than sitting in the back talking, as often happens. Our interaction with the attentive parents led to opportunities to visit families in their homes, something that is still happening.

New contacts and personal discoveries
When the two-week series of lessons ended on Sunday, January 30, we held a graduation. Each child received a certificate, a New Testament, and a goody bag. A few children had not received a shoebox when the VBS started, but since they attended faithfully, we gave them each one at the end. Additionally, we presented the plan of salvation again using the EvangeCube resource. About 20 children said they prayed to receive the Lord as their Savior. God knows, and time will tell.

The outreach also caused growth in the church members. We finished very tired but also very energized to have had the opportunity to bless children with the shoebox gifts, show them love, and teach them the Bible. One young man, Pablo,
has a pickup truck, and initially, he signed up to provide transport for chairs and supplies. Then, he sat in on a class. After listening to the first lesson, he was thrilled with the youngsters’ participation, which led him to help teach. One afternoon, he exclaimed, “It turns out that children are a lot of fun to work with!” Now, Pablo is very excited about sharing the Gospel and encouraging others. He has started a home Bible study with about five other young men using one of the Emmaus Worldwide courses.

Since the VBS, the outreach in Alberto and Tere’s neighborhood has continued on a smaller scale with about 15–20 kids each Saturday afternoon. Those children excitedly received their shoebox gifts in December 2021 and, then, studied a 12-lesson course. On March 19, they had their graduation, at which 20 children got their certificates, New Testaments, and gifts. As for the Sunday school children, after they had received
their shoeboxes and completed a series of Bible lessons, they graduated on Sunday, March 27, also receiving certificates and New Testaments.

Altogether, more than 150 children received gifts, heard the Gospel, and learned basic Christian principles. Through the events, Bibles and other Christian literature entered their homes. This united effort to show the love of God in San Juan Bautista, Paraguay, has resulted in new contacts, proclamation of the Gospel, and strengthening of the church. Please pray that there will continue to be positive effects.

Originally published in Missions magazine, June 2022. For more content, sign up for a free subscription (US) to Missions at CMML.us/magazine/subscribe.