Until the Day the Lord Returns: 55 Years of Sharing the Gospel in Argentina 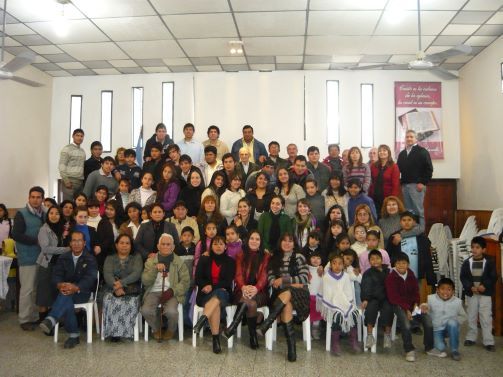 Oh, taste and see that the Lord is good; blessed is the man who trusts in Him! (Psalm 34:8)

In August 1965, after the Lord had burdened my heart to serve Him in Argentina, I left the US to attend a language school in Costa Rica. My assembly’s commendation and the farewell at the Philadelphia airport are precious memories. While in language school, I began attending a church and soon joined the choir. This enriching experience came with a bonus: I met Martha in the choir. We married at the end of my time at the Spanish language institute and, then, stayed in Costa Rica for an additional two months—working on the immigration papers that we needed to enter Argentina as permanent residents.

To reach Argentina, we first traveled to Panama by bus, then sailed down the Pacific coast of South America before traveling by train across the Andes Mountains. On September 16, 1966, we arrived in Salta, in northern Argentina. From there, we traveled to the city of Orán, where we had contacted Herbert Gerrard, an MSC missionary who had served in Argentina for many years. I had first met him when he visited my home assembly in Plumsteadville, Pennsylvania.

We lived in Orán for a year and a half, during which time we traveled with Herbert to visit rural assemblies. Seven assemblies had sprung up without missionary influence. On at least two occasions, the Lord’s work came through men obtaining Bibles while traveling through the area. I had the privilege of meeting them and hearing their stories.

One man told me that he had been in the area smuggling things across the border into Bolivia. During this trip, he passed an Anglican mission with a store. He saw a Bible on the shelf and purchased it, never imagining that the book would change his life and those of many others. As he, like the other men, read the Bible, he learned of salvation in Christ. Soon, these men were working to spread the Gospel in the area.

We wanted to be used of the Lord in the area too, but the assemblies were not accessible by road part of the year. So we moved to a place where we could better reach some of these groups, even in rainy weather. The Lord had given us our first child, a daughter, so we also wanted to be within driving distance of a city, if we needed a doctor.

We chose La Estrella, which had a train station and a train that passed twice per week. There, we built a simple house, with no modern comforts, on government land. We spent much of our time hauling water from the train station and working on our house and our Jeep. Nevertheless, what we remember most is the opportunity to share the Gospel with people who had never heard the good news—what a privilege.

The area had never had its own school, and the people were eager for basic education for their children. So, next, we built a simple school 16 miles from our house in a place called “El Retiro,” where about 20 families lived. Each morning, I drove to the school, taking with me children from La Estrella and picking up a few along the way. The rest lived within walking distance of the school. We used a simple translation of the New Testament and other Christian materials in the regular classes.

On Friday evenings, in our simple schoolhouse with only a gas light, we held a meeting for the families, and many attended. Week after week, we opened the Bible and proclaimed Christ. In the four years we worked in the area, three people professed faith in Christ, and one of them was baptized.

Eventually, we left La Estrella for Saravia, a small farm town. After our previous location, with so few people scattered over a large area, Saravia seemed like a city, with its population of about 3,000. The town had a doctor, two schools, a gas station, and stores where we could buy supplies for our family, which included two children by then. We purchased a small piece of land and built facilities for a boarding school and a camp. The boarding school soon proved too much for us. But the Lord blessed the preaching of the Gospel in the town, and we were busy visiting and building up the young Christians.

At this time, several families came to Saravia from Bolivia to work as farmers. They worked hard and eventually owned much of the land they tilled. In our first years in Saravia, several of these Bolivian immigrants received the Lord and became active in the assembly.

In 1982, the Falklands War changed our plans. We were advised to leave town for a while. Although the war ended quickly, we felt led to stay in Salta, the provincial capital, where the Lord had placed us during the war. The city offered better educational opportunities for our children and many open doors for gospel work. When we left Saravia, our assembly had about 60 believers in fellowship and some national leaders. That assembly has now grown, and today, about 150 people fellowship there.

In Salta, we began to work with a small group of believers on the south side of the city. Little by little, an assembly arose. As we had done before, we purchased a lot and began constructing a meeting place, mostly working with the men of the fledgling assembly. We found the people receptive to the Gospel. Besides those who accepted the Lord through our efforts, we received several families who had moved to Salta from Saravia like us.

Currently, about 65 believers are in fellowship with a good group of spiritual leaders who share in the decisions and in ministering the Word. A large group of single people in their 20s and 30s have proven to be a dynamic force. The Lord uses this group, as well as several older adults, to manage the present ministries and reach out to certain areas of the city, hoping to establish new assemblies.

Presently, our largest ministry is a Christian school, which grew out of an effort to establish a new assembly on Salta’s southern edge. I had earlier visited a new government housing project with almost 2,000 living units but no church of any kind. After much searching, we purchased a large lot adjoining the housing project. There, we built a small chapel and began holding services for adults and a Bible club for children. Believers from the nearby assembly helped us visit the homes to distribute tracts and worked with us in the children’s and adults’ activities.

For 10 years, we worked in the area, and during that time, we baptized three young people. We had intended to also start a school on our lot after establishing an assembly. However, we could see that the evangelistic work would take more time, so we decided to begin a Christian school meanwhile—to lead children and their parents to the Lord.

After two years of building the first classrooms, we opened the school for kindergartners. Slowly, we added more grades, and today, Timothy Christian School spans from kindergarten through high school, with an enrollment of 360 students.

Over the 28 years that the school has operated, the Lord has always provided Christian teachers. All of our students have heard the good news in the classroom, and some have received the Lord and show spiritual fruit. Many of those who studied at Timothy Christian School are active in the assembly where we fellowship.

We continue to be involved in the work of the assembly and the Christian school—I help with decisions regarding the school and serve as an assembly elder—but in some ways, we no longer have the strength to be hands-on missionaries. The pandemic has also limited our activities. We are fully vaccinated but face some risks associated with being in public places. Nonetheless, our biggest tasks are praying and helping others fit into the work to take our place.

We appreciate the prayers of the Lord’s people to this end: that He may graciously provide the leaders needed in the assembly and in Timothy Christian School until the day when the Lord returns to take His own to glory. ■

Doug and Martha Baergen are commended from Grace Gospel Chapel in Plumsteadville, Pennsylvania.

Originally published in Missions magazine, December 2021. For more content, sign up for a free subscription (US) to Missions at CMML.us/magazine/subscribe.